CBD vs THC: comparison & differences between these molecules 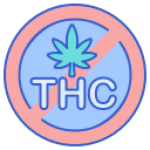 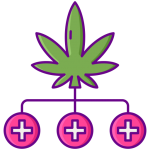 CBD and THC are two molecules found in cannabis plants among hundreds of others. And both are part of the cannabinoid package. CBD concretely means “cannabidiol” and is mainly found in the chemical composition of Cannabis Sativa. THC stands for “Tetrahydrocannabidiol” and is the main psychoactive compound found in cannabis. CBD, and THC, interact directly with the human body through what is called the endocannabinoid system. This so-called “endocannabinoid” system is a series of natural receptors mainly located in the brain, spinal cord, and nervous system. There are currently two cannabinoid receptors: CB-1 and CB-2.
These receptors mainly have the effect of activating and stimulating a natural response of the body in the face of pain, anxiety, or even stress, for example. The key role of this endocannabinoid system would be to maintain, or restore, what is called homeostasis. Homeostasis was discovered in 1866 by the French doctor and physiologist Claude Bernard. This corresponds to the capacity of an organic system to maintain the balance of its internal environment. And that whatever the external constraints which can be exerted on him. We can thus cite: body temperature, blood sugar, blood pressure, or even heart rate. 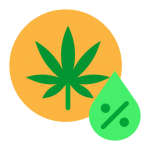 What are the effects of THC on the endocannabinoid system?

THC has a psychoactive effect. Concretely, it means that he can modify:

This is what smokers of cannabis with a high percentage of THC feel. Some people sometimes feel a so-called “high” effect which would give them relaxation, sharper senses, and a strong appetite for food. An effect would also be noted on the feeling of physical pain, but also moral during depression, or a remedy for cravings for nausea, insomnia, or lack of appetite. The consumption of recreational cannabis would also provide a certain euphoria, facilitated laughter, a powerful cerebral effect in short comparable to a feeling of intoxication. But it is also undeniable that a strong feeling of anxiety, even paranoia can be induced by the consumption of THC. 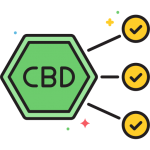 What are the effects of CBD on the endocannabinoid system?

Recently discovered, CBD is known to be a non-psychoactive cannabinoid (unlike THC). CBD even has an antagonistic effect on THC by neutralizing harmful side effects such as anxiety, paranoia, impaired senses and perception of things. CBD is said to soften the toxic effects of THC. Even more surprising, CBD would increase the positive effects of THC over time by limiting its degradation by the liver. CBD has a modulating role on THC with milder, relaxing, lasting and less psychoactive effects.

What are the effects of CBD consumption without THC?

By consuming pure CBD, that is to say without the presence of THC, the consumer will not necessarily undergo any psychoactive effect linked to THC. That is to say that its consumption does not cause any modification or alteration of the human spirit. The perception of the senses, and the feeling of the events therefore remain identical before and after the consumption of CBD. The perception of space time is the same. And the identical cognitive functioning. Your state of consciousness will therefore remain the same, and your decision-making will not be altered. The consumption of CBD also has no influence on libido, or on your ability to concentrate. The nature of your social interactions will therefore not be changed. At best, CBD could then provide a slight feeling of tranquility, zenitude. But no euphoria, feeling of drunkenness, or modification of our sense of THC.
Above all, CBD would have more medicinal properties. Scientific research has thus focused on CBD for the past 10 years. Among the lines of research, we can cite: the reduction and prevention of inflammation, nausea, diabetes, alcoholism, TSTP (or PTSD), schizophrenia, rheumatoid arthritis, epilepsy, cardiovascular disease , anti-psychotic, anxiolytic. It would also act as pain reliever, muscle spasmodic and neuropathic pain reliever.Lastly, CBD consumption would not cause addiction either. No trouble should be deplored in case of cessation of consumption after consumption even though regular and daily. On the contrary, even since CBD is now used as a treatment to combat forms of tobacco addiction! But also against hard cocaine-type drugs. As for the phenomena of gambling addiction ...

zeCBD is an information guide & portal exclusively dedicated to cannabidiol and cannabinoids. All users certify that they are of legal age and know about the laws in force in their country.

No medical or therapeutic advice is provided. Please consult your doctor for any information on medical treatments with CBD hemp.